The commissioning of the Salauli Irrigation Project has inaugurated a new phase of social and economic progress in South Goa. Conceived mainly as an Irrigation project with a substantial water supply component, the scheme has transformed the agricultural scenario of South Goa.

Assured Irrigation has transformed a predominantly rain-fed agriculture with its meager and uncertain returns into an occupation with substantial returns. Irrigation has further induced perceptible changes in cropping pattern with the subsistence-level paddy cultivation yielding place to diverse and commercially profitable crops like sugarcane, groundnut, vegetables and garden crops. The intensity of cultivation has risen in some places to nearly three crops a year against the single crop of yester-years. Exposure to modern agricultural practices through training and visits to demonstration farms has widened the horizons of farmers and inspired innovative experimentation in farming. Improved agriculture has brought in its wake other clusters of allied supplementary occupations like pisciculture, animal husbandry and other agri-businesses and industries.

A number of dramatic improvements have been seen in the field of domestic and industrial water supply. Gone are the days of water scarcity when anxiety about one's ability to collect the day's requirement of water sat heavily on one's mind. Elders remember with a heavy heart, the day's scramble beginning at dawn for collecting water from the backyard well, often turbid with thick silt, and compare with a sense of relief, the almost uninterrupted water supply twenty four hours a day now.

Treated water supply has brought about a quantum jump in the quality of life of the people and enabled the rapid urban growth of towns and cities like Margao, Vasco, Quepem, Sanguem etc as well as the rural hinterland. As if its service to South Goa were not enough, Salauli also meets a large share of the water scarcity at the Opa Water Works catering to a large part of North Goa. Besides bringing drinking water to homes, the scheme with its dependable water supply has also given a huge fillip to industrialization in South Goa.

Goa's tourism is centered around its beaches and its picturesque coastal belt. The construction of the Salauli Project has opened up the hitherto untapped hinterland tourism for harnessing. The majestic Duck Bill spillway of the dam, a unique structure in India and the first of its kind in Asia, attracts hundreds of tourists every day during the rainy season.

The sprawling and verdant Botanical Garden being developed at the toe of dam with the towering dam standing prominently in the background and girded on the left by the Main Canal is fast developing into a place of retreat and excursions. Besides proving entertainment, the garden will also be a repository of the plant life in all its diversity with immense educational potential. Boating, Yachting, Game fishing on the reservoir, are the other exciting possibilities.

While recounting the obvious benefits from the project, one should not lose sight of the many collateral benefits accruing from the project. With its huge mass of impounded water, the reservoir serves to recharge and build up the downstream ground water storage, and make ephemeral streams flow perennially. Benefits to flora and fauna and the environment in general due to such a build up can well be imagined. The list of such benefits could go on. 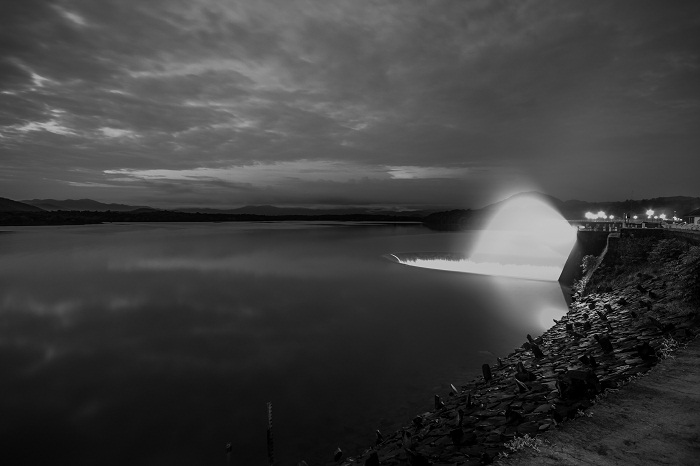 (Only one canal on Left Bank)

Welcome to the Department of Water Resources, Goa, India.

This Website belongs to Department of Water Resources, State Government of Goa, India.

Material featured on this site may be reproduced free of charge in any format or media without requiring specific permission. This is subject to the material being reproduced accurately and not being used in a derogatory manner or in a misleading context. Where the material is being published or issued to others, the source must be prominently acknowledged. However, the permission to reproduce this material does not extend to any material on this site, which is explicitly identified as being the copyright of a third party. Authorisation to reproduce such material must be obtained from the copyright holders concerned.
Last Reviewed & Updated on 02 Dec, 2015